Summary of Human Clinical Trials With Lactobacillus fermentum ME-3 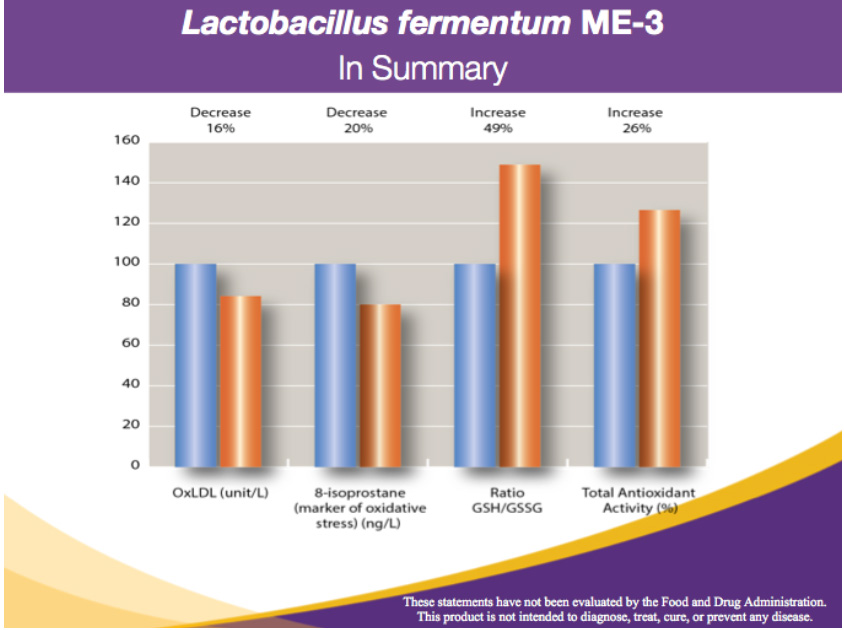 Subjects: One hundred clinically healthy volunteers (75 females, 25 males, age 40-65 years) were recruited into a double-blind placebo-controlled randomized study. For various reasons, 25 people in the control group and 2 in the treated group dropped out. Hence, the results are based on 48 treated subjects and 25 controls.

Study Design: This study utilized kefir with ME-3 added as the test agent and kefir without any probiotic as the control agent. Both kefir solutions were identical nutrient composition, color, taste, and caloric value. Volunteers all consumed an identical standard meal.

Testing: After a 2-week introductory period, baseline blood and urine samples were obtained 2.5 hours after ingestion of the standard meal. Then volunteers also ingested 200 ml of kefir with ME-3 or control kefir daily for two weeks and were then re-tested.

Results: Volunteers ingesting kefir containing ME-3 exhibited the following: a) -16% in oxidized LDL-cholesterol (reduces cardiovascular disease risks) b) -20% in 8-isoprostanes (reduction in free radical damage) c) 10% increase in HDL-cholesterol (not shown on graph) d) 18% increase in paraoxonase enzyme activity (PON1) which regulates
detoxification of pesticides and provides antioxidant activity (not on graph) e) 10% decline in triglycerides (not shown on graph)

Testing: Blood and urine samples were initially tested and then again at the end of the 3-week trial. Blood was analyzed for total antioxidant activity (TAA), total antioxidant status (TAS), ratio of oxidized to reduced glutathione, oxidized LDL-cholesterol and 8- isoprostanes (measure of free radical damage to unsaturated fatty acids). Also, fecal samples were collected at the beginning (day 0) and again at the end of the trial (day 21).

Results:  Survivability & Gastrointestinal Persistence: Initial testing reported that Lactobacillus fermentum was present in the intestinal tract of only 4 of the 16 test subjects. At the end of the trial, fecal samples revealed that the GI tract of all 16 test subjects were colonized with ME-3. Furthermore, testing also revealed that ingesting goats’ milk fermented with Lactobacillus fermentum ME-3 resulted in a doubling of live ME-3 bacteria in the intestinal tract.

a) When taken orally, ME-3 survives transit through stomach, which means it does not get killed when exposed to strong stomach acids.

b) When orally ingested ME-3 arrives in the intestinal tract, the bacteria are able to adhere to the mucosal lining and grow/multiply as evidenced by doubling the concentration of live ME-3 bacteria after 21 days.

Reduction of Cardiovascular Risks: Free radical damage to lipoproteins (oxidized LDL-cholesterol) can ultimately damage cells that line the arteries, resulting in plaque build-up and atherosclerosis, which is one of the primary causes of cardiovascular disease. ME-3’s antioxidant activity resulted in a substantial decrease in oxidized LDL- cholesterol.

Increased Antioxidant Protection:
a) The ME-3 test subjects exhibited a substantial reduction in urinary levels of 8- isoprostanes (8-EPI) which is recognized as one of the most reliable ways of measuring oxidative stress.

Part 2: Brain Stroke: 21 patients (ages 71-89) who had experienced a brain stroke sometime between 8 to 22 days earlier were randomly divided into 2 groups. Subjects consumed either 3 capsules of ME-3 twice daily or 3 placebo capsules twice daily for time that ranged from 10 days to 3 weeks. Patients were evaluated on the Functional Independence Measure inventory (FIM) and on the Scandinavian Stroke Scale (SSS).

Part 3: Assay of Blood & Urine Markers: 15 healthy volunteers, ages (40-65). After a 2-week introductory period, the volunteers were randomized into a double-blind, placebo-controlled, crossover trial. Individuals ingested kefir with ME-3 or placebo kefir for two weeks. After a 3-week wash-out period, new blood & urine samples were taken and then subjects crossed over to take the alternate regime for an additional 2 weeks.

Results: Volunteers taking ME-3 experienced improvements in all blood and urine markers evaluated compared to controls.
Doses of Lactobacillus fermentum ME-3 Used in the Human Clinical Trials

Capsules: In most of the studies where the test subjects were taking capsules containing Lactobacillus fermentum ME-3, the dose was one billion bacteria per day. In the brain stroke study, the dose was 6 billion per day.

NOTE: Even though the daily dose of ME-3 is much higher in the kefir delivery method compared to the dose of ME-3 in capsules, it is interesting to note that the magnitude of the beneficial changes (oxidized LDL-cholesterol, PON enzyme activity and total antioxidant status) are quite similar in the kefir trials compared to the capsule trials. This indicates large doses (20- 30 billion) do not provide additional benefit beyond moderate doses containing several billion bacteria. The Reg’Activ formulas contain from 4 to 6 billion cfu of ME-3 per day.

Working as a glutathione-activating agent via three different mechanisms, Reg’Activ is set to impact the future of preventative and restorative health on a cellular level.